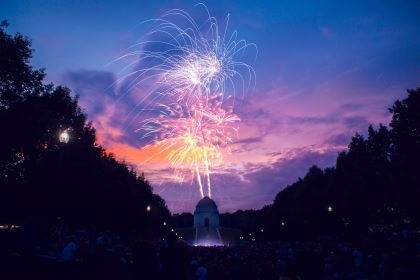 Columbus is a city that’s been on a rapid rise in terms of popularity and overall acclaim in recent years. In 2016, it was named by Money Magazine as one of the six best big cities in the country and has numerous awards all basically saying the same thing: Columbus is the place to be. So, if you’ve never visited our fair city, there are a few places that tourists absolutely should stop by to get a good feeling of the city. We’ve listed a few here below.

Even a lot of Columbus natives are unfamiliar with this incredible place. The Topiary Park should seem a familiar place, even if you have never been there. That’s because artists recreated the scene from George Seurat’s famous painting, A Sunday Afternoon on the Isle of La Grande Jatte. Fifty-four life-sized hedge sculptures greet you and keep you company while you’re there for a picnic or just a day of uninterrupted reading. Make sure you make this stop a must on your visit.

The Columbus Zoo and Aquarium

Nationally renowned, the Columbus Zoo and Aquarium is one of the best in the country. Six distinct habitats house over 10,000 animals that make for an informative trip. In addition to the great animal exhibits, during the summer, seasonal water park activities are available! Come for the animals, learn while you’re there, and end the day soaking in the pool. Make sure you check this one out.

There’s no place like the ballpark during the summer. The sun is shining, the air is filled with the crack of the bat and the cheering of the crowds, and best of all, you can get a great tasting dog. At Huntington Park, you don’t have to pay ridiculous prices for the top tier teams, but you can still see players great at their craft with a super enthusiastic crowd. Get ready to back up the Columbus Clippers and for the fireworks that go off at the end of the game.

Are there any cooler activities in the city other than ziplining? It doesn’t even sound like something you should be able to do, and yet, in Columbus, you can do just that. Book a ziplining tour and go through the forest nearby the city. Try a canopy tour or take a moonlight tour to experience the city by night. For adrenaline junkies, they include a short free-fall. It’s an experience you have to be a part of to believe, so book your tickets to it soon.

Columbus is full of great activities. We could only include a few, but no matter what you do in this city, you won’t be bored. And best of all, Ohio Coach can get you there faster than anyone else. Go on our site and book your trip today!